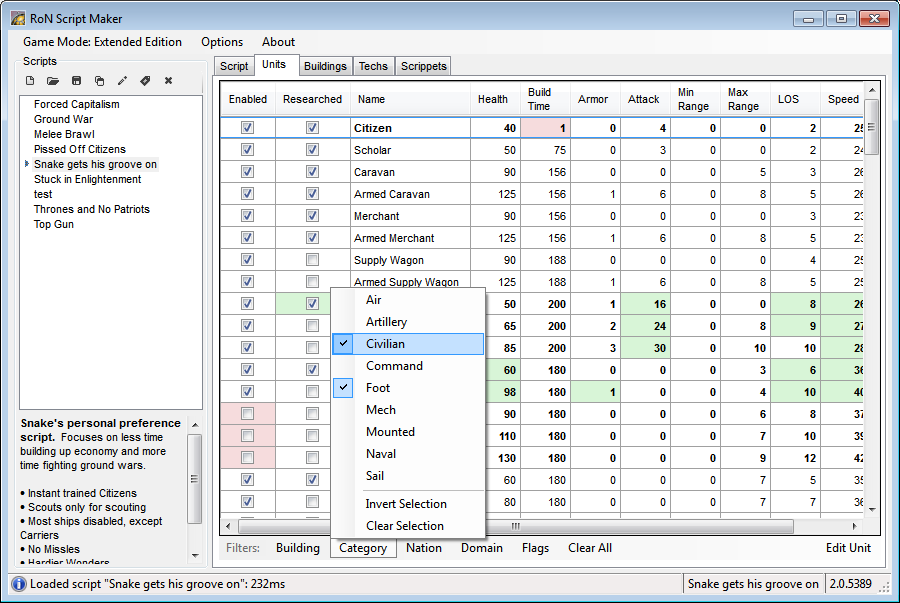 I’ve been working on a new version of my Script Maker for Rise of Nations since the release of the Extended Edition a few months ago.  I naively thought it just was going to be a matter of converting the code to .Net and updating a few routines to support EE.  However, once I saw the state of the code, I decided it was going to have to be completely rewritten.  After all, it was ten year old code written in VB6.  And I was really appalled by the “hackiness” of so much of the code—mostly because VB6 had so few built-in functions and relied on the Windows API so much.

So since I was rewriting the whole program anyways, I took the opportunity to make numerous improvements.  I won’t post the whole changelog, but here are some of the highlights:

At this point, I’m mainly just doing testing and documentation. So, expect release within the next couple of weeks.  I may put a call out for beta testers before then, but I haven’t decided yet.

I’ve done a couple new apps recently. They’ve both been in the new-to-me .NET environment. The first one I made just to do it. It searches for instances of fonts in HTML code (either HTML, CSS, or script) using regular expressions and reports the findings through three lists.

The second app was born from necessity. I was tired of games not locking the mouse cursor into the current monitor, so I made a program to watch the selected app for focus and lock the cursor accordingly. This is obviously for multiple-monitor setups. It took about a week to code altogether but functions perfectly. It even has hotkeys to get you out of sticky situations. UltraMon can lock the mouse cursor to a certain monitor on hotkey press, but I knew I could do it better. My app locks the mouse cursor to whatever monitor the selected app is on automatically. It also locks it more efficiently by using the ClipCursor API function and checking to see if the app has focus or not. You can download both of these apps from my Apps page.

Also of interest is a recent Email that I received from Joe Pishgar, PR guy at Big Huge Games. He said that “several of [our programming team] outright insisted I do my best to get you into the Rise of Legends beta!”. Of course, it’s not like I’d say no to beta testing the “sequel” to Rise of Nations. I’m not sure when to expect my beta copy, but I suppose it should be within the next month by the way they’re hyping it now. Joe also mentioned that some of the programming team were quite impressed by my Script Maker for RoN.

shits they are a happenin

There’s a few things that have gone on lately that I shall point out.

I also recently uploaded my incomplete Uber Resources T&P v2 to RoNH. It adds the T&P campaign rares like gold, rum, and cattle. Snatch that here.

The next item has to do with the website. I recently asked my host about upgrading my site to a new package and here’s the answer I got back:


I’ve upgraded your account to the GigaDeal X5 package and the monthly price is the same as your previous package. If you need further assistance, please let us know. Thank you.

Check this page to see what the package offers. You’ll obviously notice that it upgrades my space from a measly 200MB to 5GB. Given the copious space, I’ve decided to upload a bunch of my music (original, unfinished, and remixes) and videos. You can get to it by clicking the Downloads button on the nav or here.

And boom. I guess that’s it. I’ll probably be playing Dungeon Siege all week, so yeh…won’t be very productive.

Said Column about networking and sharing on a laptop and desktop is nearly done. It’s not so short, though. More like 3200 words. You can find it here.

I’m also working on the next (final?) version of the RoN Script Maker. I’ve got some small fixes and features added already, but have yet to code the primary feature: code parsing of scrippets.

There’s right, after at least a year of no new demo reviews, I have finally added a review for Act of War. If you like commando games and C&C, you’ll have to check this one out here. Also, anyone that’s interested in demo reviewing can email me about it. It’s a shame that my demoboard system doesn’t see much use.

I released a minor bug-fix version of RoN Script Maker the other day. I fucked up royally with the Object Stats saving and loading 😕 , but it’s fixed here. I don’t think I’ll post on the RoN Heaven forum about RSM anymore, so I’ll just stick the last changelog additions below. I’m already working on another minor release that will have a few fixes, hopefully (finally) resizing of the app, and add craft max to the Object Stats (for generals, scouts, etc).

Changed in 0.9.27:
-fixed a little annoyance when setting up the script list after a save causing the loaded script to be unselected
-fixed a bug where the object stats in the RSM save file were not cleared before saving again. this caused changes to be appended and unremovable.
-email links in the about tab now get my current email address from s–l.com. should still open your default email app (tested with outlook), but also leaves a blank browser window open (tested with ie).

In other RoN news, I’m working on a new area of mod development: Map Styles. As far as I know, nobody has really touched on this in the community. I’ve been getting tired of the old styles, so I plan on modifying all the originals and releasing a pack that will install and swap in and out the mod with the originals. There are 4 main drawbacks to developing map styles, though. One is they can’t be loaded like a mod (they must be loaded on game opening, when it reads the internal_strings.xml file). Second is they can’t be added to the list of styles (making the swapping necessary). Third is the lack of documentation on map styles (except for a few xml comments). Finally, the game retains some elements of map generation (mainly water placement), however trees, rivers, tileset, mountains, rocks, fish, ruins, and rares are all fully editable. It’s a pain, but it’ll be worth it

. As you can see from the following screenshot, I’ve already composed two new styles: Island of Eden and Wasteland.

I haven’t had as much time to work on the site and apps and such as I’d planned because I was given Half-Life 2 and Doom 3 for Christmas. The former I just finished yesterday after an unexpected and rather uninspired ending. I have much criticism of HL2 and it just doesn’t deserve the 98% from PCG and unpresidented 11/10 from MaxPC. First off, my biggest gripe is Steam. It works on the assumption that you will only be playing games from Valve and have a broadband connection. It’s also a huge annoyance for its new piracy measures. Not only did I have to copy everything from 5 discs, but I then had to sign up for Steam, decrypt the entire 4GB of data, download critical parts of the engine, and then download the latest update. Five hours later, I actually got to load HL2. It takes a while to load, and I’m afflicted with some kind of bug that causes the game to hang while loading after roughly 15 to 20 loads (quickloads and new area loads). It also wasn’t that fun of a game. After the first few hours of “woah, check out this engine!”, the gameplay gets rather unexciting. There’s nothing you haven’t seen before. It only looks better. Then there’s only half the number of weapons that HL had, a weak plot, and unclear mission objectives. I had the feeling a number of times that I was just wandering through the linear maze of a level and shooting things without a purpose. However, there are a few isolated cool scenes in the game. One being the Tremors/Starship Troopers “Ant Lions” chapter. Some of the squad stuff was also fun. While HL2 may look absolutely stunning, it plays rather lame.

I just installed Doom 3 today. I was initially put off by the fact that Doom 3 doesn’t like to run when Daemon is installed. I immediately went for a NoCD that fixed it right up. These game developers and publishers are going too far with the piracy protection. It’s almost a pain to be legit these days. That aside, Doom 3 is quite impressive. It sure did scare the shit out of me when the accident happened and the guy right next to me became a zombie. However technologically advanced, it still feels reminiscent of Doom.

And because you never have too many screenshots:

Now for the real news. LOL. 😉 I fixed the email script and there’s a new major beta release of the RoN Script Maker. It now comes in two flavors: Full Version and Lite Version. The difference being that Full has an installer/uninstaller, makes start menu shortcuts, and installs necessary redistributables (hard ass word to spell and type).